We’ll keep our political opinions to ourselves 🙂

Last week was the third week of Session 2, and the 7th field week of SCRAP 2016. Boy, are we feeling it. Not only did we claw our way through Week 7 (this crew is an amazing bunch of troopers), but we also had to deal with non-stop RNC coverage on television, leading to many a heated political discussion at the breakfast table (no arguments, just a bunch of Canadians, Belizeans, and a lone American voicing our opinions — we won’t say anything more on the subject).

Starting the long dig to sterile

The week saw the winding down of excavations, with crew members at each of the settlement sites/mounds trying to reach sterile levels in their deep excavation pits. Kelsey and Higinio’s mound turned out to be quite curious, with what appears to be a round structure/feature siting to the front of the house platform itself. This curious feature will definitely be a focus of future investigations. 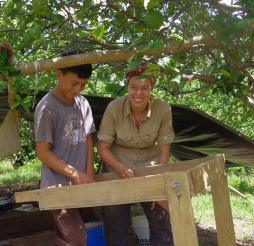 Shawn and Sylvestro’s deep excavations that revealed the bottom double course (all that remained of a much higher face) platform face of the over 2m tall platform was both a relief and something of a let-down, but nonetheless hugely informative. 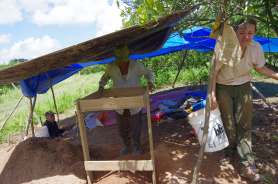 Teaghan, Mr. Gonzalo, and Mr. Zoilo’s confusing piles of granite and other stone became a bit clearer and may actually provide direct evidence for metate production at the site (stay tuned for more information in our 2016 final report). This will also be the focus of future investigations at Alabama.

Meaghan spent the week conducting ceramic analysis; this is an important pursuit for building a site type collection, beginning to assign tentative dates to our various contexts (to be refined through carbon dating), and to begin understanding some basic domestic activities at each location. Cristina also engaged in some serious lab work, finishing much of the washing, cataloguing, and basic analyses. Virginia served a rotating-role, helping with final excavations and mapping activities.

Overall, the second last week of field work was a great success. Our final week will focus on mapping, profiling, photographing, and backfilling, as well as one final community outreach and engagement presentation.