We’re now in Week 9 (? who knows… COVID time) of self-isolation, and today was our fifth meet up of the SCRAP online reading group. This week we read a stimulating article about the use of spatial network analysis in Andean archaeology. We had 9 people take part in Canada, US, Belize, and Mexico. Our special guests were Dr. Nancy Peniche May and Dr. Jeffrey Seibert, whose backgrounds in ancient architectural and spatial analyses in the Maya world provided particularly relevant insight into the article under discussion. This week’s article was chosen by the SCRAP GIS specialist, Mr. Dave Blaine, who also wrote the following summary and discussion questions. 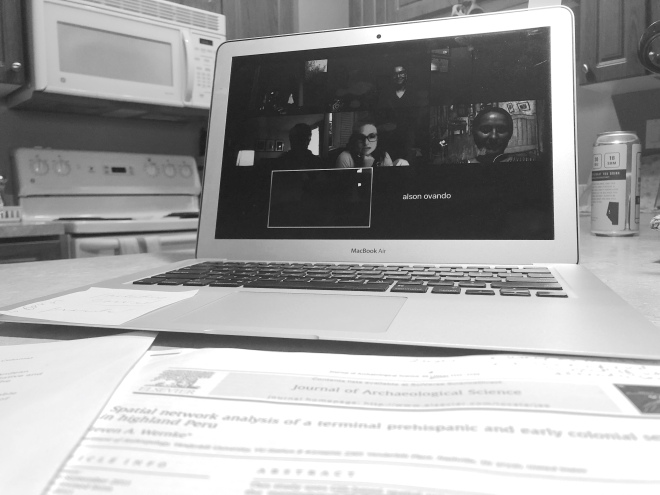 This study focuses on a GIS-based spatial network analysis (SNA) of the site of Malata in the Andean highlands of southern Peru, and argues for the broad utility of this approach to provide quantitative and reproducible simulations of movement through the built environment of archaeological sites.  The general idea behind SNA is that spaces can be reduced to components; analyzed as networks of movement choices; visualized as maps and/or graphs that describe the presence and depth of connectedness within those spaces.  It is thought to be possible to quantify and simulate how navigable any given space is, (pre)determine common routing through those spaces, and inform the prediction of the correlation between spatial layouts and social phenomena such as crime, purchasing habits, or in this case processional and commensal ritual traffic.

Malata is well-preserved architecturally, and the author suggests that it provides a record of the significant changes to the built-environment that occurred during a “chronologically controlled window” as the site shifted from a modest Inka administrative centre to a Franciscan doctrina. Furthermore, the site allows for a comparative analysis of Inka and Spanish spatial planning priorities and movement, highlighting the “disparate beliefs and practices associated with the built environment”.