Last week, our first official week of SCRAP 2016, was jam-packed with learning and activity as the crew got their introductions to the site and learned about unit setup  and excavation techniques. On Monday (and Tuesday), we were all introduced to the site by touring the epicenter and around the settlement within the orchard areas. Visiting the epicenter gave us a general understanding of the architecture present at Alabama, and we discussed the various structures and their proposed uses.

After touring the site, we returned to our lovely air-conditioned hotel (it was very hot in the orchard) to sharpen our trowels and prepare our field kits for the upcoming excavation (see previous blog post, https://scraparchaeology.com/2016/06/01/what-exactly-is-in-an-archaeologists-field-kit/ ).

On Tuesday, our entire group (archaeologists, students, and field assistants) returned to the site and discussed our “plan of attack” for the season. Following this discussion, we returned to the orchard to clear the mounds of vegetation where we would be setting up our first units. Any exposed artifacts on the surface were collected after the mounds were cleared, and exposed granite blocks were flagged. This allowed a better understanding of the spatial extent and orientation of the mounds, which are presumed to be platforms that supported perishable domestic structures.

Based on this information, we then set up excavation units (suboperations) on two of the mounds. This was done using systematic methods (which we will introduce in an upcoming blog), and a lot of patience and a lot of re-measuring.  Excavations of the units then commenced, with Cristina and Virginia working on the backside of one mound and Megan and Kelsey along the front slope of another. Shawn worked with the rest of the crew at the epicenter in order to complete mapping using the total station. On Wednesday and Thursday, excavation of the two subops continued in the orchard and granite blocks and evidence of the perishable superstructures (daub) began to appear.  Shawn and the remainder of the crew continued their work in the epicenter.

Excavations in the settlement zone

The fifth day in the field was a rainy one! Megan accompanied Shawn, Sylvestro, Jason, Idelfonso, and Juan to continue clearing and mapping the epicenter, and to learn about how a total station is used to create topographic maps. Due to the continuous rain (and lack of shelter for our screening area… which has been rectified in Week 2), our day of fieldwork was cut short. As an alternative, Meaghan brought our crew to the site of Nim Li Punit in the northern end of Toledo District.  This site was chosen in order to familiarize the crew with additional examples of architectural features that may be encountered during excavations at Alabama this season.  Overall, the week was a productive one full of learning and new experiences and we are looking forward to what Week 2 has to offer! 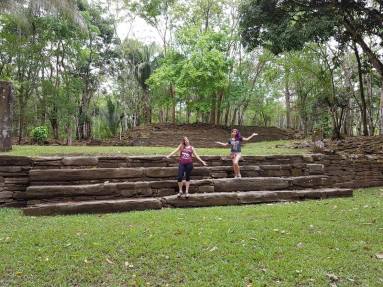 SCRAP directors Dr. Meaghan Peuramaki-Brown and Dr. Shawn Morton will be presenting along with Dr. Marieka Brouwer Burg of the BREA project. Our presentation is titled "Away from 'The Field': Pivoting Archaeological Investigations during Pandemic Times." See link in bio for information on how to view the recorded presentations, and join us tomorrow for the discussion. Registration is free or by donation. #scraparky #belize #mayaarchaeologyinbelize #stanncreekdistrictbelize
Exactly! #scraparky
Happy May the 4th! Link in bio #scraparky
Congratulations to Antonio Beardall on his successful MA thesis defense! Toni’s research, titled “Public Archaeology and Cultural Heritage Management in Belize: Success and Shortcomings” discusses important topics regarding the history of archaeological outreach and collaboration between archaeologists and the Belizean public, current efforts made by Belizean organizations and institutes to engage and educate the public on the histories of Belize, and the challenges of public misconception and the lack of resources needed for such institutions to operate in the most efficient manner. We are excited to see the in-field implications of this research and look forward to future research by @mr_madonna ! #scraparky #belize #belizearchaeology
Thank you to Dr. Elizabeth Paris for joining us for this week's discussion about obsidian. The article was an oldie but a goodie that led to 3 hours of conversation! Thanks to all who took part. See link in bio for Lorraine's summary and questions. #scraparky #stanncreekdistrictbelize #belizearchaeology
To the SCRAP team members who constantly harass Meaghan for better dust pans...get ready! 😂 #scraparky