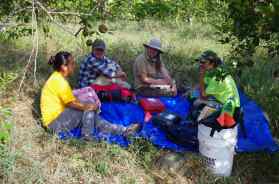 Virginia regaling fellow crew members with folktales from her village

There are many stories in Belize. The popular folklore of the country is a unique blending of many different influences, from Kriol, to Spanish Mestizo, German Mennonite, Garifuna, and of course various Maya peoples. Perhaps the most ubiquitous of characters/creatures spoken about around campfire, table, and excavation unit are Tata Duende and Ixtabai. We were treated this week to a version told by our friends and colleagues from Maya Mopan, Virginia and Sylvestro. When it comes to tales of the supernatural, most of these stories give us the willies, so please excuse our paraphrasing… we may have passed out once or twice. 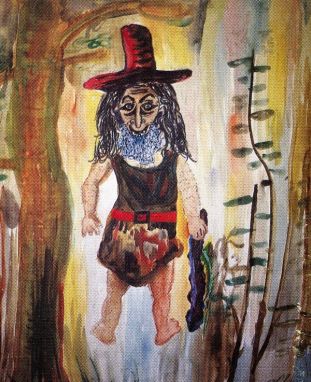 Tata Duende – Tales of Tata Duende are told everywhere in Belize.  Though his feet are attached backwards, he sure gets around!  By all accounts, he is an ugly little man wearing a large-brimmed hat, and has no thumbs.  He doesn’t seem to let this get in the way of his romantic aspirations, and routinely lures attractive women away from their homes with his sweet guitar licks.  However, Tata Duende lives deep in the Belizean jungle, and that is normally where he is encountered.  He is said to greet children who walk the jungle trails, and politely ask to see their hands.  Watch out! Lest you oblige and Tata Duende rips (or cuts) your thumbs clean off!  Parents also warn their children that if they skip class, Tata Duende will lure them into the jungle, never to be seen again.

In general, however, Tata Duende is a benign spirit; a trickster and shape-shifter that can disguise himself as animals or other people and is often invoked to explain strange events around the home and farm.  Sylvestro tells how his friend used to keep horses around his house.  Sometimes, at night, their manes would get hopelessly tangled and would have to be cut off.  Tired of this, they moved the horses to another location.  The next morning, his friend’s sister’s hair was knotted and tangled into a horrible mess!  As untangling her hair could be seen as a portent of death, they left things as they were and brought the horses back.  The next morning, the sister’s hair was no longer tangled, but the horses were once again due for a shave. 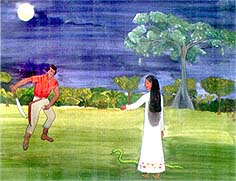 Xtabai (Ixtabai) – Look, but don’t touch!  Wait… it’s probably best not to look either.  Xtabai is a bit of a black widow; she uses her long raven hair and sweet voice to enrapture men and draw them to a grisly end.  According to Virginia, her favourite prey is jealous men, particularly if they have been harsh or inconsiderate toward their wives or girlfriends. 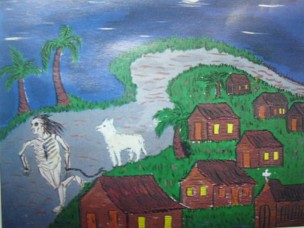 Cadejo – Another one of our favourite stories (or nightmares) is that of the Cadejo.  Most often described as a big dog with a length of chain tied around its neck and sometimes with burning red eyes and goat hooves, the Cadejo may be either benevolent or malevolent depending on which aspect you are chance to encounter.  While the White Cadejo will escort the pleasantly sopped (tipsy) home and protect her/him from would-be robbers, the Black Cadejo will lead the drunk to their demise.

If you happen to be stumbling home and hear the loud sound of a chain right behind you… don’t worry, the Cadejo is a long way away.  On the other hand, if you hear the faint jingle of a chain far off and smell a strong odor of goats you may be in the presence of the Cadejo.  Don’t turn around!  To see the Cadejo is to go mad.  Beware.

There are plenty of other spirits and creatures in Belize.  Check out the internet.  Talk to a friend over a rum.  Keep your eyes on the jungle and watch out for your friends!

#scraparky
The joy of going back through field notebook sketches to trace the evolution of ideas at the trowel’s edge (and noting all spelling mistakes) ❤️#scraparky #ilovearchaeology #belize #stanncreekdistrict #ancientmaya
The learning continues #scraparky
Here’s a nice little write-up about ancient Maya 'grafitti' by archaeologist Rosamund Fitzmaurice: https://mexicolore.co.uk/maya/home/maya-graffiti
There are two more ceramic types left to introduce before we submit a paper on our newly established typology (using the names that you voted for) for peer review. The Maya Mopan type is very distinctive in the Alabama ceramic assemblage. The pottery is composed almost completely of rounded quartz sand and the color of the vessels ranges from white to tan to pink. We have only recovered a few rim sherds, and these indicate that the vessels had a fairly standardized rim diameter and were likely squat bowls and/or jars. The composition is consistent with the white soil horizon that you can see when you are driving down the Southern Highway in the Stann Creek District. We are not sure who produced this pottery because the raw materials for its production can be found across a large area so it could have been produced by people living in multiple locations in East Central Belize. #scraparky #belize