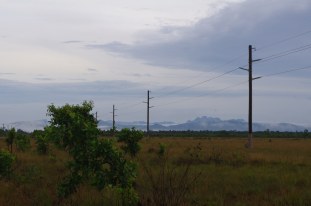 Looking from the coast toward the Maya Mountains

Last week (Week 2) at SCRAP was an eclectic mix of activities. Some excavations gained momentum, some just began, and others decided to take a long lunch.  There were several opportunities for learning new field mapping techniques, evening artefact washing parties, artefact cataloguing and basic analysis, and another field trip to a nearby site! Our excavation goals for the week were to try to uncover and expose any architecture of the housemounds (buried building platforms) we are investigating, so we might gain a better of understanding of their layout/design and begin to piece together their occupation histories by recovering debris from both on and off platform areas.

Testing at a residential platform

The crew awoke bright-eyed on Monday morning ready to once again be bestowed with the shimmering glow and sweet scent that 35ºC heat and +65% humidity leaves on your skin. Shawn and I headed out to the epicentre in the morning so I could learn more about mapping with a total station.  The rest of the crew headed out to our settlement site excavations in the orchard, after Mr. Juan, Mr. Idelfonso, and Mr. Sylvestro graciously set up shelters over units. Cristina, Virginia, and Mr. Idelfonso worked in one unit to expose more of the granite facing blocks they uncovered the previous week, while Kelsey, Mr. Sylvestro, and Mr. Juan worked on another excavation unit in search of the up-‘til-then elusive face.  I returned from the epicentre after lunch and joined Kelsey, while Mr. Sylvestro joined Shawn to continue mapping.

Tuesday was a full excavation day for everyone on site; Cristina, Virginia, and Mr. Idelfonso continued in their unit with the goal of trying to further expose any architecture and fall. Kelsey, Megan, Mr. Sylvestro, and Mr. Juan worked on their mound in attempt to find any evidence of the building, which appeared to be covered in much overburden, but instead found a lot of sandy loam and a very large root that bore a strong resemblance to a shrunken head. Shawn and Mr. Jason continued to work on mapping the epicentre, and Meaghan remained on site with the rest of the crew guiding and helping between units. 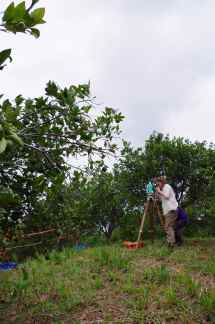 Mapping mounds and shooting in excavation units with a total station

Those of us in Independence awoke in the middle of Tuesday night to a fantastic thunderstorm, complete with torrential rains (a result of Tropical Storm/Cyclone Colin further north). When we arrived on site both units had been impacted by the storm, despite our shelters; one had a small pool of water that had accumulated while the other had a large hole in the northwest corner from the collapse of a massive ant nest (which has apparently caused significant disturbance at our mound, shifting entire architectural blocks from their original positions). We removed the water from the one unit and sandbagged the tops of its walls, and gave the other unit a stern talking to and left it to think about what it had done. We also made sure to allow our units to dry out for the day, and to “bathtub” each with a second tarp at the end of each day.

Getting ready to tape-and-compass map our new mound

But all was not lost for the day, and what was a loss in one area transformed into a great opportunity for learning in others. Meaghan decided that we would open our next unit on another mound at the group, and so Kelsey, Cristina, Virginia, and I measured out and set up the new excavation area (see our upcoming post on unit set up for an idea of how that went). Later, Cristina worked with Shawn on using the total station to start mapping the site while Meaghan taught Kelsey, Virginia, and I how to tape-and-compass map a new mound discovered in the bush, within spitting distance of our settlement site. After lunch, Cristina continued working with Shawn and Mr. Sylvestro; Meaghan and Virginia attempted work in one unit that had dried; and Kelsey, Mr. Juan, Mr. Idelfonso, and I began work at the new unit.

Rain in Independence on Wednesday night had us all worried for what condition our units would be in on Thursday but luckily it had been a relatively dry night at Alabama and our tarp-and-sandbag system worked well.  Excavations continued on two of the mounds, but since our one badly behaved unit (the poor ant-eaten one) was still throwing a temper tantrum, Kelsey fine-tuned her total station skills with Shawn and Mr. Sylvestro.  Excavations continued into Friday with Kelsey finally able to resume working at her mound.

Saturday morning was spent learning how to properly catalogue artifacts and conduct basic analysis on materials that had been uncovered and washed over the first two weeks of excavation. Virginia came with us back to Independence on Friday evening and helped us with our morning work. That afternoon we headed out to Lubaantun in Toledo District and stopped in at Punta Gorda afterward for a lee drink. 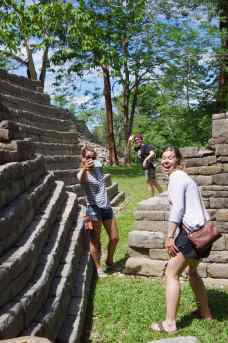 Learning (and having fun) at Lubaantun, Toledo District

And so ended another knowledge-filled and productive week at SCRAP. Stay tuned for more exciting adventures!