Last week (Week 3) was a down and dirty type of week, filled with breakfast tamales, moving large quantities of dirt (Editor’s Note: soil and sediment… matrix… check out TMZ for “dirt”), expanding of units, and some super basic survey work (Shawn was doing it, after all). 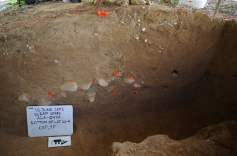 Platform face at Mound A. Where is it??

Kelsey and Mr. Juan started the week by expanding their unit a meter north in a futile attempt to find any semblance of architecture. After two full days of excavating this new expansion the decision was made to once again increase her unit another full meter north. But alas, poor Kelsey had no such luck in finding her imaginary building; she spent the remaining two days of the week leapfrogging between her two, 1 m expansions in an attempt to bring them down to the depth of her original unit. Then tragedy struck! With the frustration of Mr. Juan growing daily with the lack of artifacts found, he was moved to a more fruitful unit (aka Mound D), leaving Kelsey feeling abandoned and sorrowful. But a gracious Sylvestro bit the bullet and joined Kelsey for the last day of the week, and they have a new strategy for this week.

Feature fun at Mound B

The most magnificent of mounds, was continued by me and Virginia. We began with a 50 cm by 1 m expansion of our unit in an attempt to chase a rather large feature that continued into our northern wall. Our entire week revolved around this one feature. We spent the first few days removing the topsoil of our expansion until the very top of our feature appeared. It was then that we began the painstaking process of carefully exposing and mapping the boundaries of our monstrosity of a feature (for more details, watch for the 2016 report in early 2017). For two full days this was the only goal in sight. Various carbon samples, soil samples, and bags full of matrix allotted for floatation later, our goal was met. All we had left to do was to, very lovingly, excavate it (internal screaming). So, Friday morning, with Meaghan’s help, we divided our feature in quarters and set to work removing all artifacts and soil (once again for floatation). This is where I have to admit that my beast of a digging partner Virginia shined; she carefully dug out our feature faster than I could complete the write up. With all paperwork finally completed and our feature completely removed, we ended the day thanking the archaeology gods that we had not messed it up.

Megan and Mr. Idelfonso spent the week with the sole goal of finding where their platform face ended, with the idea that this will also be where the theoretical living surface would appear. After several days of moving massive quantities of soil, with no end in sight, it became more and more apparent to Megan that this face did in fact reach all the way to China. In a drastic change of pace, Megan and Mr. Idelfonso were allowed a one-lot break on Thursday to dig on the top of their structure in order to find out what was being used as fill. Spoiler alert!!! It was more dirt [Editors Note: see note above].  By the end of our half-day on Friday, a miracle occurred and the bottom of their platform face was finally found. Hallelujah!

Shawn, with Sylvestro in tow, spent most of the week mapping the site core, which was finally completed by the end of the workday on Wednesday.  He then joined the rest of the crew in our blistering orange orchard, to continue the unit he had opened the week before. Although much of this unit remains to be excavated, it is already becoming one of the more unusual units. This is due to the large quantities of stone that have been found throughout the unit. Perhaps this is where all of Kelsey’s missing architecture has gone!?! Unfortunately, we were forced to wait in anticipation for the next week (final week of Session 1) to see what would appear. 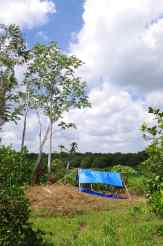 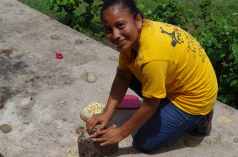 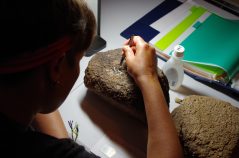 In order to keep up with the quantities of artifacts that are being uncovered daily we have gotten into the habit of having ‘washing parties’ [Editor’s Note: she means “partay”] every afternoon after the field. What this entails, is everyone sitting around washing artifacts with some pretty sick tunes playing [Editor’s Note: courtesy of Shawn… Everyone else’s music is below standard.  Don’t get me started on the “trifecta of awesome”] and perhaps a cold beer in hand. Not only have we been doing that, but we have also started to process all the soil that was allotted for flotation. We also started our experimental grinding and metate use-wear study (more on that later). In order to complete all the lab work (which includes washing, flotation, cataloguing, and basic analysis) we only dug for a half-day on Friday. Further, due to it being Megan’s last weekend in Belize, it was a mad dash [Editor’s Note: but responsible] to finish up all our work before heading out on the water taxi to Placencia (aka. a little slice of paradise). With only a few minutes to spare, we made it!

SCRAP directors Dr. Meaghan Peuramaki-Brown and Dr. Shawn Morton will be presenting along with Dr. Marieka Brouwer Burg of the BREA project. Our presentation is titled "Away from 'The Field': Pivoting Archaeological Investigations during Pandemic Times." See link in bio for information on how to view the recorded presentations, and join us tomorrow for the discussion. Registration is free or by donation. #scraparky #belize #mayaarchaeologyinbelize #stanncreekdistrictbelize
Exactly! #scraparky
Happy May the 4th! Link in bio #scraparky
Congratulations to Antonio Beardall on his successful MA thesis defense! Toni’s research, titled “Public Archaeology and Cultural Heritage Management in Belize: Success and Shortcomings” discusses important topics regarding the history of archaeological outreach and collaboration between archaeologists and the Belizean public, current efforts made by Belizean organizations and institutes to engage and educate the public on the histories of Belize, and the challenges of public misconception and the lack of resources needed for such institutions to operate in the most efficient manner. We are excited to see the in-field implications of this research and look forward to future research by @mr_madonna ! #scraparky #belize #belizearchaeology
Thank you to Dr. Elizabeth Paris for joining us for this week's discussion about obsidian. The article was an oldie but a goodie that led to 3 hours of conversation! Thanks to all who took part. See link in bio for Lorraine's summary and questions. #scraparky #stanncreekdistrictbelize #belizearchaeology
To the SCRAP team members who constantly harass Meaghan for better dust pans...get ready! 😂 #scraparky