Week 4 has been another week full of ups and downs–but mostly ups here in Stann Creek District and beyond.

Sunday was a very lazy day, where most of us slept for the most part, because we were still sick from the glorious Placencia. Some of us drank tap-water from the wrong place, some people ate meat that could have been bad, but most of us had heat exhaustion from not drinking enough water and sunbathing in the bright and hot sunshine.

The more fortunate of us, who were feeling good enough to eat lunch did an artifact-drawing workshop with Shawn.

In the evening, almost everybody ate (and held in) dinner. Yay! 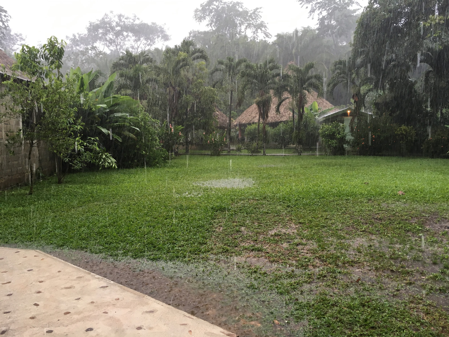 On Monday, we did not excavate in our sites because the downpour from the previous day caused the units to flood. Instead, we spent the morning bailing the water out. The settlement area looked like it was affected but the water seemed to have drained out before we arrived. Unfortunately, the units in the monumental core flooded so we had to help bail the water out.

After, we visited the sites of Nim Li Punit and Lubaantun. We were supposed to visit these sites on Sunday but since most of us were sick, we decided to go today instead. It was rainy when we arrived at Nim Li Punit but that didn’t stop us from having a blast! Despite its small size, Nim Li Punit is famous for its many carved stelae. Interestingly, the site’s name came from a stela that depicts a figure wearing a large headdress! In the K’ekchi language, Nim Li Punit means “big hat.” 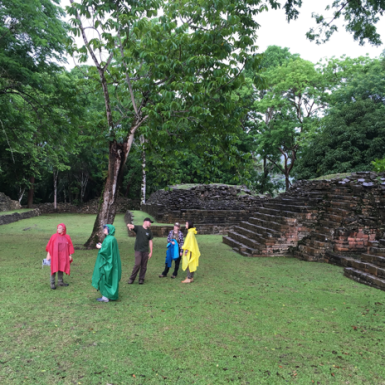 On structure 10 (Operation 5) we have closed Lot #3 which was at what we assume is the plaza area. We have continued to dig horizontally inside the structure, hoping to find the fill of the building and some more defined architecture.

Large part of the day was also spent on trying to save the site from flooding (again). However, this time the water just started soaking through the soil and because the whole operation is on a slope, there was nothing we could do about it. As the rain got stronger after lunch, we had to leave one hour early after the local field assistants helped us fix the tarps. We can only hope that we don’t have to build SCRAP’s Ark tomorrow.

After work, Dr. Kathryn Reese-Taylor who arrived yesterday, checked up on all of us who are working on independent research paper, to find out if we need any help. She is very approachable and helpful so we are sure everything will go smoothly. Meaghan then gave a lecture about household and settlement archaeology.

Finally a sunny day! It significantly lifted up everybody’s mood, which made the day go by much faster. Therefore, lots of work was done on both structure 10 and in the settlement.

After bailing water from the northwest corner of sub operation 5B we had to map the whole structure 10 (operation 5), both from top and profile view, as there were many changes in Lots going on. The mapping was slightly more complicated than it probably had to be, as we have caused ourselves some problems with miscommunicating the data. Next time we will make sure that only the person drawing the map is recording all the data necessary, as it should help avoid any uncertainties that cause us our precious time.

Digging in the building we have reached a cobbled surface and Mira has found our operation’s first piece of obsidian, about 2×1 cm big.

In the settlement area (Site ALA – 045A) we began to excavate the middle portion of our sub-operation (3F), and a part of the previously excavated sub-operation 3C from 2016, inside the platform feature in hopes to uncover something. We designated it as Lot 15 and we had to dig very carefully in case something important is found. I wonder what we’ll find inside!

During lab Shawn taught the rest of us how to draw artifacts and we love it!  Many of us will probably consider volunteering in the ARKY labs at U of C and maybe making some extra cash with this cool new skill.

On Thursday we discovered a red clay in a vein like shape in sub operation 5A. In 5B, going inside the building we noticed changes in matrix and identified three different ones, so we made artificial stairs to divide the matrixes and be able to make a top plan map if them.

Out in the settlement area, one of our local field staff (Mr. Juan Paquiul), found a very large portion of a ceramic vessel in the northwest corner of the unit. Apparently, this find is the most complete vessel found in the site of Alabama thus far (how sad)!

In the evening, Kathryn gave a lecture about her own research at the site of Yaxnohcah. The site is located in the state of Campeche in Southern Mexico and has been occupied since the Preclassic Period. Yaxnohcah is considered one of the largest Preclassic sites in the Maya Lowlands in terms of the structures in the site and its area.

Today went by very slowly, as most of the day at structure 10 was spent mapping the area with red clay as well as Lot #4 (dig through building). Very little soil has been screened so we didn’t find anything significant except a few pieces of daub.

In the settlement area, we finished digging Lot #17 in the middle portion of the platform and began excavating Lot #18. We found some lithics, pottery sherds, an obsidian, and an  interesting piece that could be amber!

In the evening we watched a documentary about the Maya ‘collapse,’ with a particular focus on archaeological investigations of caves in the Cayo District of Belize.

Early in the morning we set out on the road to Cayo. We finally got to see the beautiful Hummingbird highway, through which we all slept the first day arriving from the airport. Our first stop was the sight of Xunantunich. There we met Dr. Jason Yaeger whose archaeological group is still excavating the site and it’s hinterlands to this day. He gave us a great tour around, explaining all the building’s purposes and the meanings of symbols on the main palace. We climbed on top of El Castillo and had the most amazing view of the whole site and the jungle and cities surrounding.

After, we went to have lunch at Benny’s and checked in at the gorgeous Martha’s Inn. It’s luxurious rooms were a welcomed (and needed) change for all of us.

As soon as we were done exploring San Ignacio and having some foo-foo drinks, we were invited for a BBQ party at Meaghan and Shawn’s friend’s house. Miss Kay taught us how to make tortillas and fry jacks. Later in the evening Adela was happily surprised by a birthday cake for her upcoming birthday. It was delicious! The evening was very pleasant and relaxing for everybody, as well as the night spent on the comfy beds.

We left the inn early in the morning to get breakfast and Erva’s Restaurant (thank you to Karim and the entire staff) and then headed out to the site of Cahal Pech. We got an exclusive tour from Dr. Claire Ebert who conducted research at Cahal Pech. Cahal Pech dates to the Early Middle Preclassic making it one of the oldest Maya sites in Western Belize. Claire guided us around the site and then we were given free time to explore the site ourselves. About halfway through our tour however, rain started and continued for the rest of time at Cahal Pech. Despite the sudden downpour, we had a lot of fun exploring the site and its passages in the structures!

After Cahal Pech, we drove to the Blue Hole to swim into. We decided to swim in the Hole despite the slightly colder weather and the freezing water and had a blast! We also went into the cave in the Blue Hole just to see what it looked like and found darkness and bats!

Then we finally went home to Maya center after a fantastic weekend in the Cayo district before dinner. We also met the new members of the SCRAP Project: Jill Jordan, Linda Howie, and Joanne Potter, who all arrived over the weekend.

We are looking forward for the last week of the field school and we hope you enjoyed this blog!

Congratulations to Antonio Beardall on his successful MA thesis defense! Toni’s research, titled “Public Archaeology and Cultural Heritage Management in Belize: Success and Shortcomings” discusses important topics regarding the history of archaeological outreach and collaboration between archaeologists and the Belizean public, current efforts made by Belizean organizations and institutes to engage and educate the public on the histories of Belize, and the challenges of public misconception and the lack of resources needed for such institutions to operate in the most efficient manner. We are excited to see the in-field implications of this research and look forward to future research by @mr_madonna ! #scraparky #belize #belizearchaeology
Thank you to Dr. Elizabeth Paris for joining us for this week's discussion about obsidian. The article was an oldie but a goodie that led to 3 hours of conversation! Thanks to all who took part. See link in bio for Lorraine's summary and questions. #scraparky #stanncreekdistrictbelize #belizearchaeology
To the SCRAP team members who constantly harass Meaghan for better dust pans...get ready! 😂 #scraparky
Dr. Shawn Morton (GPRC instructor) and Dr. Meaghan Peuramaki-Brown (Associate professor at Athabasca University and GPRC visiting scholar) hosted a presentation on Friday, March 26, 2021 on their research of frontiers and boomtowns. Learn about their long-term research in Alabama, Belize – an old townsite located outside of the Maya heartland, that was a bustling frontier town during its time roughly 1,200 years ago, and their future plans for community-based research closer to home in Bezanson, Alberta. This was an opportunity to provide important community input, as Dr. Morton and Dr. Peuramaki-Brown work to connect and show the similarities of these two locations, even through they are separated by more than a millennium and thousands of miles. 👉Follow link in bio to see an article about them and a link to the recorded talk (available for the next 30 days)👈 #scraparky #belize #stanncreekdistrictbelize
Thank you to Dr. Geoff Braswell for joining us in Friday's conversation about money/currency (did it exist??), its production and procurement, and core-periphery relations in the ancient Maya world. Click the link (also in bio) for article summary and discussion questions (courtesy of Matt Longstaffe). #scraparky #belize #stanncreekdistrict
In celebration of International Women’s Day 2021, we’d like to thank all the amazing women who have supported—through a variety of ways—the Stann Creek Regional Archaeology Project. These women have challenged, explored, taught, studied, surveyed, excavated, analyzed, innovated, illustrated, written, presented, cooked, cleaned, toured/guided, chauffeured, trailblazed, constructed, fixed, mentored, shared, organized, advocated, fundraised, cared, and so much more. SCRAP would not exist without you—Thank You! #IWD2021   #ChooseToChallenge 💜