Here is our final blog entry from our field school students–but don’t worry, the rest of the team will keep you posted about the coming week.

We got back to the field after a lovely weekend away. It’s the students’ last week in the field and we are excited to wrap up our excavations. It felt like an early morning again after our glorious sleep-in on Sunday.

In the settlement, we finished digging down inside the structure. It was all fill, with some ceramic sherds (as always!). Johana and Kristine drew a profile while Gill dug a 50cm x 50cm hole down as far as she could in 50 minutes, since it was the end of the day. We were hoping to get to sterile soil – meaning there are no artifacts in it, and we would finish excavating. We didn’t quite get there, as there were still a couple ceramic pieces found in screening.

In the monumental core, Structure 10 was as eventful as ever! Doug began excavating the hole he found and recovered carbon for radiocarbon dating. They dug below the cobble fall in lot 5B-4 and encountered a packed clay surface, which they believe is the plaza floor. They excavated through the surface, which was only 2cm thick, and found a ballast of gravel and small cobbles. They also removed all of the cobbles in lot 5A-5 and dark dirt, exposing a red clay interval.

In structures 1/2 6A, they continued exposing several possible packed floor surfaces, and were trying to expose the facade of structure 2. Lower down, the group removed 9 granite stones from the rock fall (tough work!) and exposed what appears to be two parallel rows of stones – a possible wall.

Once we got back from site, we had Lab and some of the students catalogued general artifacts while others practiced cataloguing small finds. Seems like it should maybe be simple, but it’s not so obvious! Then we had Miss Elta and Miss Yolie’s tasty cooking for dinner.

As we tried to get in the Vomit Comet (the van) and pull away, we realized we had a flat tire! So we had a slow start to the morning. We got to the site about an hour late.

Shawn, Johana and Kristine went to the settlement for just a couple hours in the morning, to dig the 50cm x 50cm hole down a bit deeper and find sterile soil. They dug down about 60cm altogether. And finished up with the unit. Sad to say goodbye! 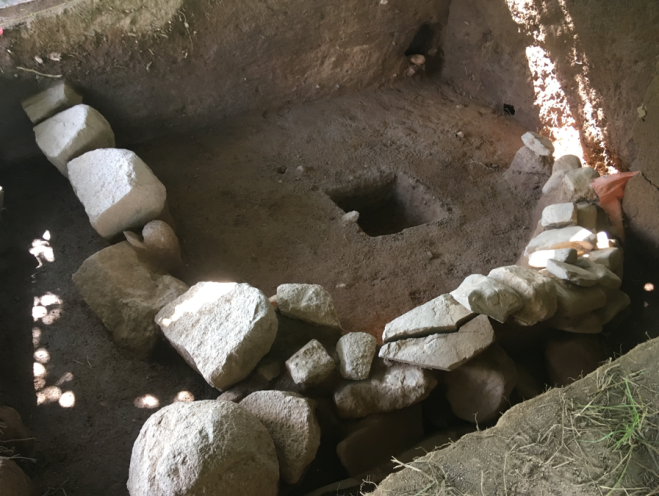 At structure 10, they began extending the 1m wide plaza trench into the building in 5B to continue looking for architecture, didn’t find any. In 5A they removed a red clay layer to find it was approximately 25cm thick. Doug accompanied Dr. Joanne Potter (our geologist) and discovered a lot of different types of granites and learned about the milpas on the hillsides surrounding Alabama.

At lunch, it was Miss Juana’s birthday, so we sang her Happy Birthday. And then they gave us ice cream! They’re too nice to us.

At structures 1/2, the upper unit was continuing work to expose the surface. They dug down and hit the fill of the building. Woohoo! The lower unit mapped the top plan and profiles all day. It was a trying, but rewarding experience.

We got back to base and had our showers, and after dinner, Dr. Linda Howie gave a talk about petrography and how it can be used to better understand the who/what/when of the people at Alabama. Very interesting!

Doug accompanied the geologist Joanne to the quarry, and discovered what they think is hydrothermal dolomite – for us non-geologists, that’s dolomite (a type of carbonite) that’s had carbon deposited in it by hot water below. In 5B, they finished leveling a 50cm trench into the building and found nothing new. In 5A excavated they second 1m x 1m unit, finding nothing for 60cm except a piece of granite, which may be a cornerstone from one staircase (maybe), and nothing else. All lots were closed out. It seems like this structure was maybe previously excavated in the 80’s. Too bad!

On Structure 1/2 in the upper unit, they excavated a possible posthole and then finished taking measurements and drawing the plan view. Down below, they pulled three rocks, and exposed what appears to be the granite (always granite!!!) covered surface of the building. They completed the profile, and pulled two more rocks, further exposing the face (?!?!). They also dug a 1m x 50cm hole, where in the last 10 minutes, they came down on half of a round granite slab–to be investigated next week. An exciting day for the students to finish on, leaving lots of work for the future!

Mr. H. Chiac  Jr., Mr. L. Salam, and Mr. J. Chiac removing one of the rocks under the supervision of Dr. Reese-Taylor.  Photo by: Niki Phillips

The students from the settlement just tried to make themselves useful where they could.

After our day at site, we went back and voted on which pamphlet we liked best to give to the people of Maya Mopan. We had dinner, showered, and off to bed. We mention the shower because of how incredibly important it is. After a day digging in the heat of Belize – we stink!

Our last full day in Belize! We had breakfast at the same time as usual, and then had a slow morning, packing up and getting ready to leave. We left the base at 9:00 to head to Maya Mopan for our outreach presentation!

Once most people showed up, Meaghan gave an awesome presentation about what has been done at Alabama, both before this year, and specifically what happened this season. Everyone had a chance to talk about their unit.

Then the field assistants from Maya Mopan, as well as their families and friends, looked at some of the artifacts that we found both this year, and in the 2014 and 2016 excavations. It was so much fun to see the kids getting all excited and learning about all the artifacts.

We all had a delicious meal of rice and beans. We can’t believe how much amazing food Miss Juana made for us all!!

After lunch, we took some group photos, and the students said goodbye to some of the workers. Then, everyone that wanted to come hopped in the truck and the van to go to the waterfall. All the students, Shawn, Meaghan, Megan, Jill, Dr. Howie and her son Tristan, and Dr. Joanne, Sylvestro, Mr. Paquiul, Hinio Jr. and Mr. Alfonso came along. It was maybe a half hour walk, and then we played around in the beautiful waterfall. 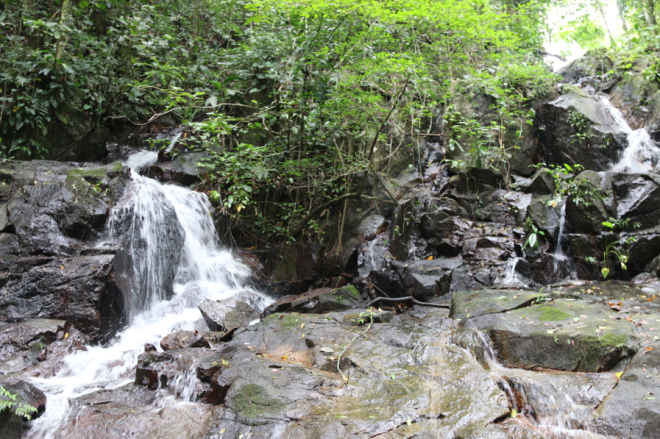 We said goodbye to the last four guys before heading back to Maya Centre for a party! It was Miss Aurora’s birthday party/a goodbye party for us. Mr. Ernesto’s brother has a marimba band and they came and played us music, there were marimba dancers, and all the kitchen staff made amazing food (as always), but also partied and danced with us. It was such a lovely night, and we couldn’t have asked for a better send off. Miss Aurora in her beautiful dress – photo by Gillian Taylor

It was a great way to end our time there and we went to bed tired but happy.

The day the student leave Belize!

We all woke up again at the normal time and had one last Belizean breakfast, Shawn and Meaghan loaded up all our suitcases, and we said goodbye to Miss Aurora and Mr. Ernesto, and all the kitchen staff – Rick, Miss Elta, Miss Yolie, and Kitty Soft Paws.

We hopped in the Vomit Comet one last time and drove the 2.5 hours to the airport, stopping at the Artbox (a tourist gift shop) on the way. All the students (and Megan) except for Nikki were headed home. She is staying for another week, scuba diving in the Cayes. Lucky! Kathryn also is leaving the site, but heading to Xunantunich to work there for a week before heading home.

We got to the airport nice and early, and found out our flight was an hour delayed. No biggie, we hung out, chatted and had snacks in the terminal. We flew from Belize to Houston, and were a bit worried about our shortened connection, but it ended up being just fine, and we got to Calgary at about 9:15pm. We were sad to leave, but happy to be home.

Thanks (botik) for reading – You’ll still be hearing lots more from Meaghan, Shawn and the crew in Belize.

Bye for now, Niki and Gill. 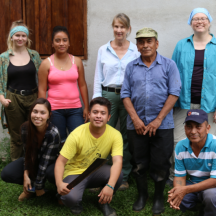 Belize Navidad (😏) from the SCRAP Team, Shaggy, and Sting 🎄🎉❤️
😂
I realise I posted this when we first received the "In Press" notification... But hey! Self promotion! Also, we've been given a promo code if you pre-order at www.upcolorado.com worth 40% off! The code: MORT19 #archaeology #ancientmaya #mesoamerica #conflictstudies
Here's another tour for you! Enjoy a guided walk through the Monumental Core. #scraparky https://youtu.be/2pFyce38C9s #Archaeology #publicoutreach #visualstorytelling #adventure #no_ordinary_life
Everyone please have a look at our #ArchaeologyDay walk-through tour of the Settlement sites of Alabama from our 2919 field season. https://m.youtube.com/watch?v=R5XfK7S1_AI&feature=share #Archaeology #scraparky #publicoutreach #visualstorytelling #adventure #no_ordinary_life

© 2014-2019 Stann Creek Regional Archaeology Project. Unauthorized use and/or duplication of this material without express and written permission from this site’s author and/or owner is strictly prohibited. Excerpts and links may be used, provided that full and clear credit is given to "Stann Creek Regional Archaeology Project" with appropriate and specific direction to the original content. For additional permissions, please contact Dr. Meaghan Peuramaki-Brown at scrap.arky@gmail.com